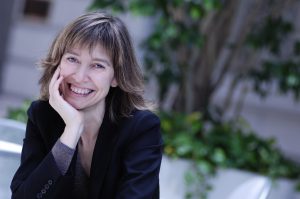 Born in Angoulême, Désert began learning the piano at the age of five. At fourteen, she joined the Conservatoire de Paris (CNSMDP). A student of French composer Jean Hubeau, she won the First prize for chamber music.

In 1985, she was unanimously awarded the first piano prize by the jury. She then enrolled in the class of the Bulgarian pianist Ventsislav Yankov. In the same year, she was admitted into the piano improvement cycle. She obtained a scholarship from the French government and went to study for one year at the Tchaïkovski Conservatory of Moscow, in the class of Yevgeny Malinin. Back in France, she joined the class of cellist Roland Pidoux and further perfected her chamber music skills.

Since the early 1990s, the musician has performed on stages such as the Wigmore Hall, the Kennedy Center and the Salle Pleyel as well as in international festivals at the invitation of La Folle Journée, the Piano aux Jacobins (fr), the Lille Piano(s) Festival, the Flâneries musicales de Reims (fr), the Festival international de musique de Colmar (fr), the Stavelot Festival and the George Enescu Festival in Bucarest.

In 1997, she was named “New Talent of the Year” at the Victoires de la musique classique for her performance of the Czech composer Antonín Dvořák’s and the Russian pianist and composer Alexander Scriabin’s concertos, with the Orchestre Philharmonique de Strasbourg.

It has been several years now that Claire Désert comes to Barfleur to play in the church during the festival. We are proud and flattered and so excited to hear her play again !